Can you imagine England without Oak Trees?!

The English Oak (Quercus robur) is one of the most recognisable trees in England – as a child, I was encouraged to collect it’s leaves and draw them (such an iconic shape) and the acorn cups were obviously hats discarded by fairies! There’s so many of them that they seem to fill our landscape, they are one of the richest habitats with individual trees supporting countless birds and insects and, best of all, they seem to live forever, or at least for a very, very long time. And yet… they’re under attack?!

Tree Heritage versus the Beetle – Part 1

Recently we were approached by a lovely lady called Mary who works as an entomologist for the Forestry Commission – she is researching the possible role played by a small beetle in the death of large numbers of mature oak trees. The beetle concerned is the comically named Agrilus biguttatus (I couldn’t help but imagine a beetle dressed as a Roman centurian carrying large potatoes!) and they may be partly responsible for Acute Oak Decline.

Quite a large number of the oak trees showing the symptoms of Acute Oak Decline also have very characteristic ‘D-shaped’ holes in the bark where the Agrilus biguttatus beetles have emerged. The female uses a lethal-looking ‘ovipositor’ to lay her eggs deep within cracks of the bark. When the eggs hatch, the young larvae burrow inside the tree and feast on the soft inner tissues – if there’s enough of them, this feasting can destroy the tree’s ability to obtain nutrients. As soon as the adults hatch and leave through their ‘D-shaped’ holes they ‘beetle’ up to the top of the tree to feed on the leaves.

If the eggs are laid inside the bark, the larvae spend all their time inside the tree and the adults emerge and instantly scamper up to the top of the crown, how are scientists going to obtain live samples to study, I hear you ask?! How about delivering a tree containing the beetles to the laboratory?

So, Mary had found a tree on the Shugborough Estate which seemed to have evidence of the dreaded beetle and what she really needed was for pieces of the tree to be delivered to her. 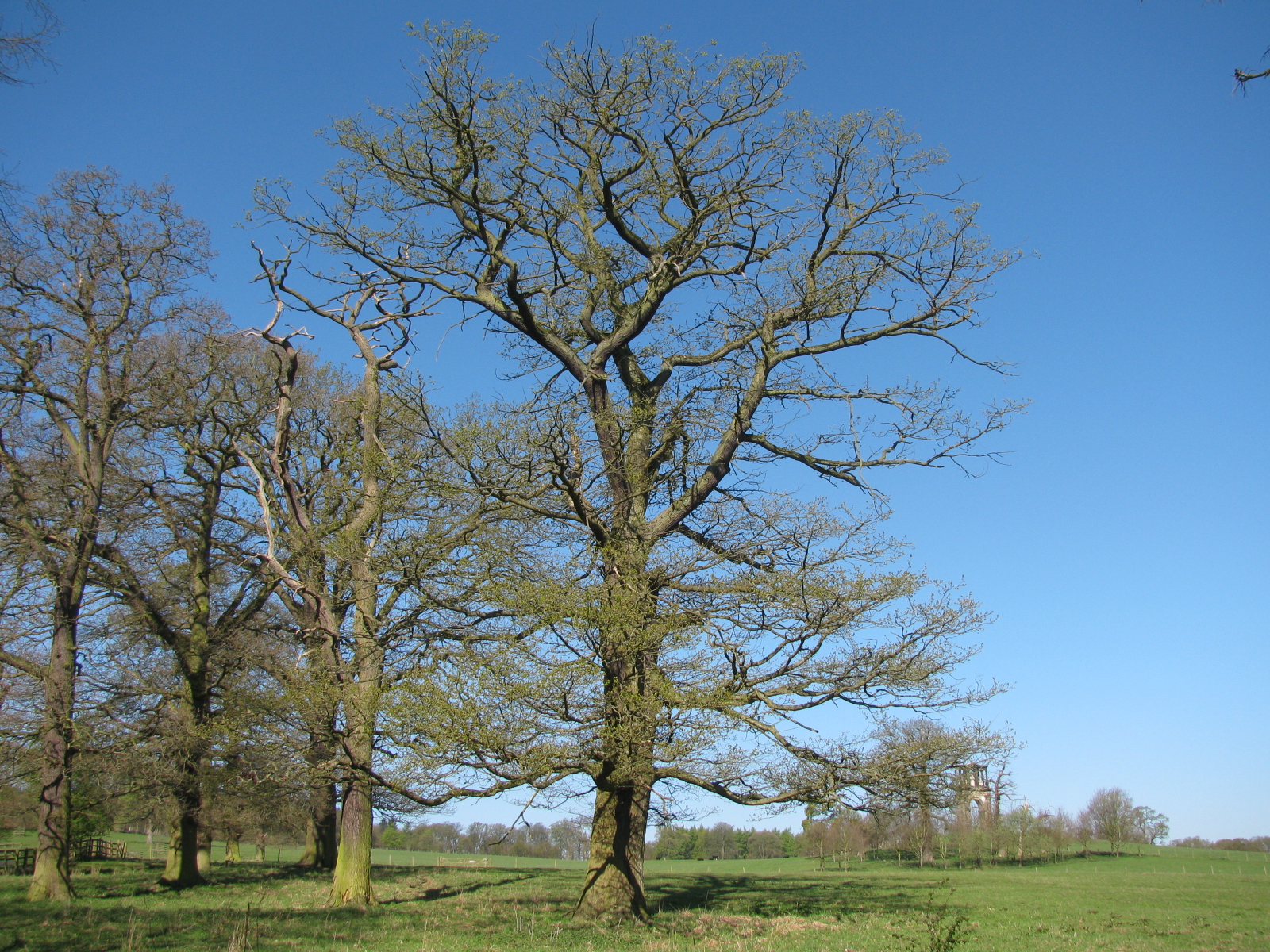 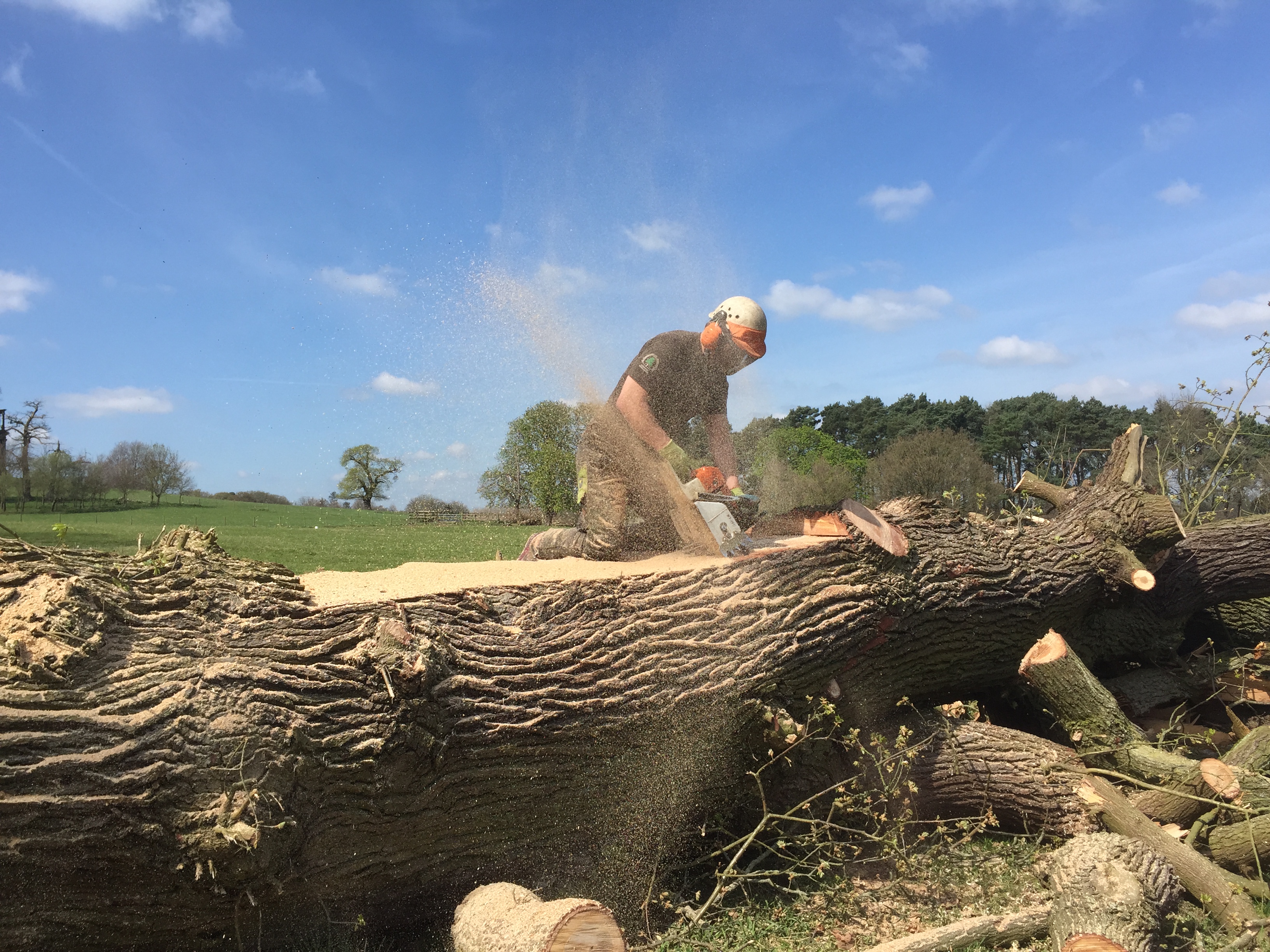 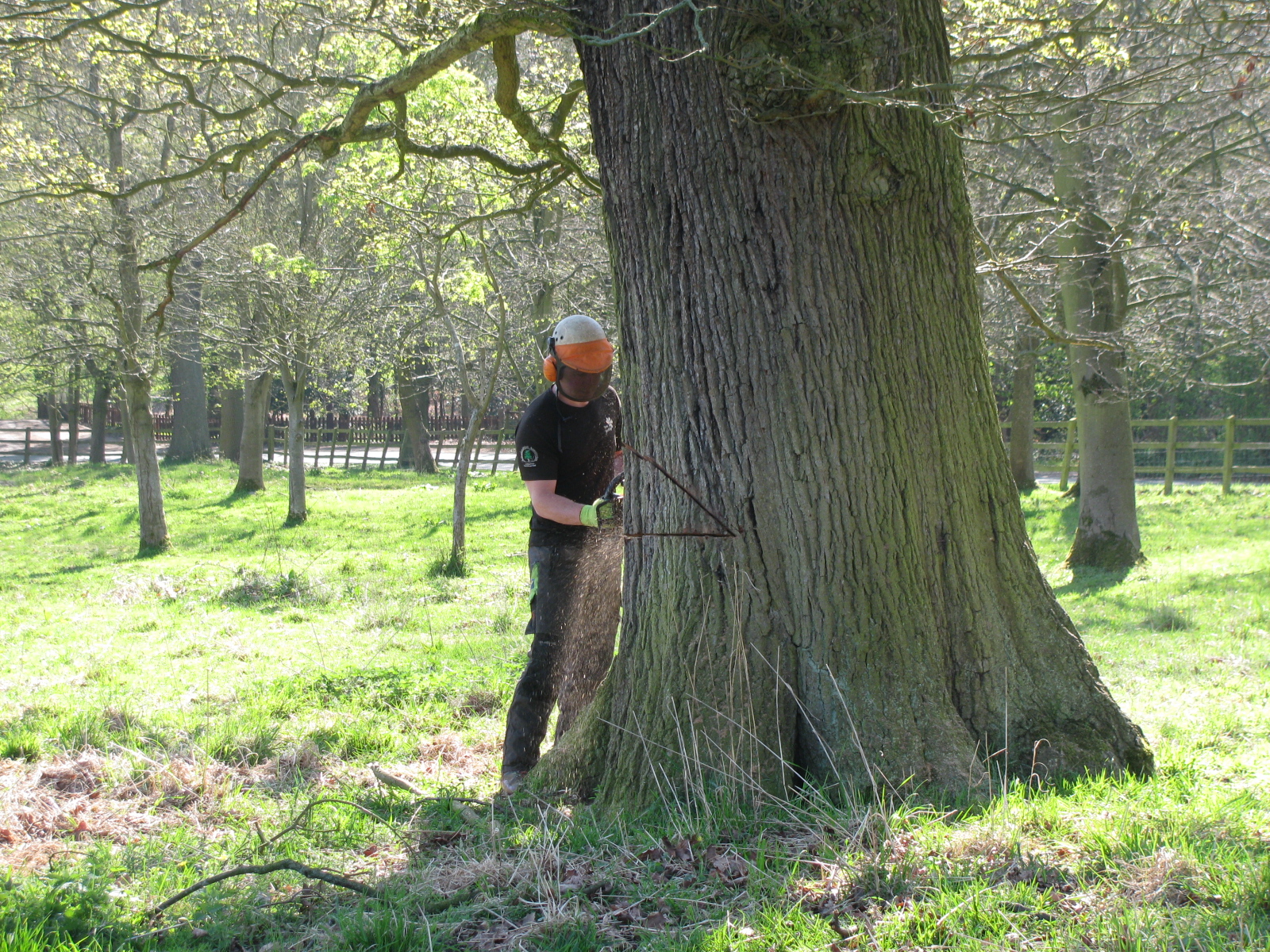 Wedge being cut out 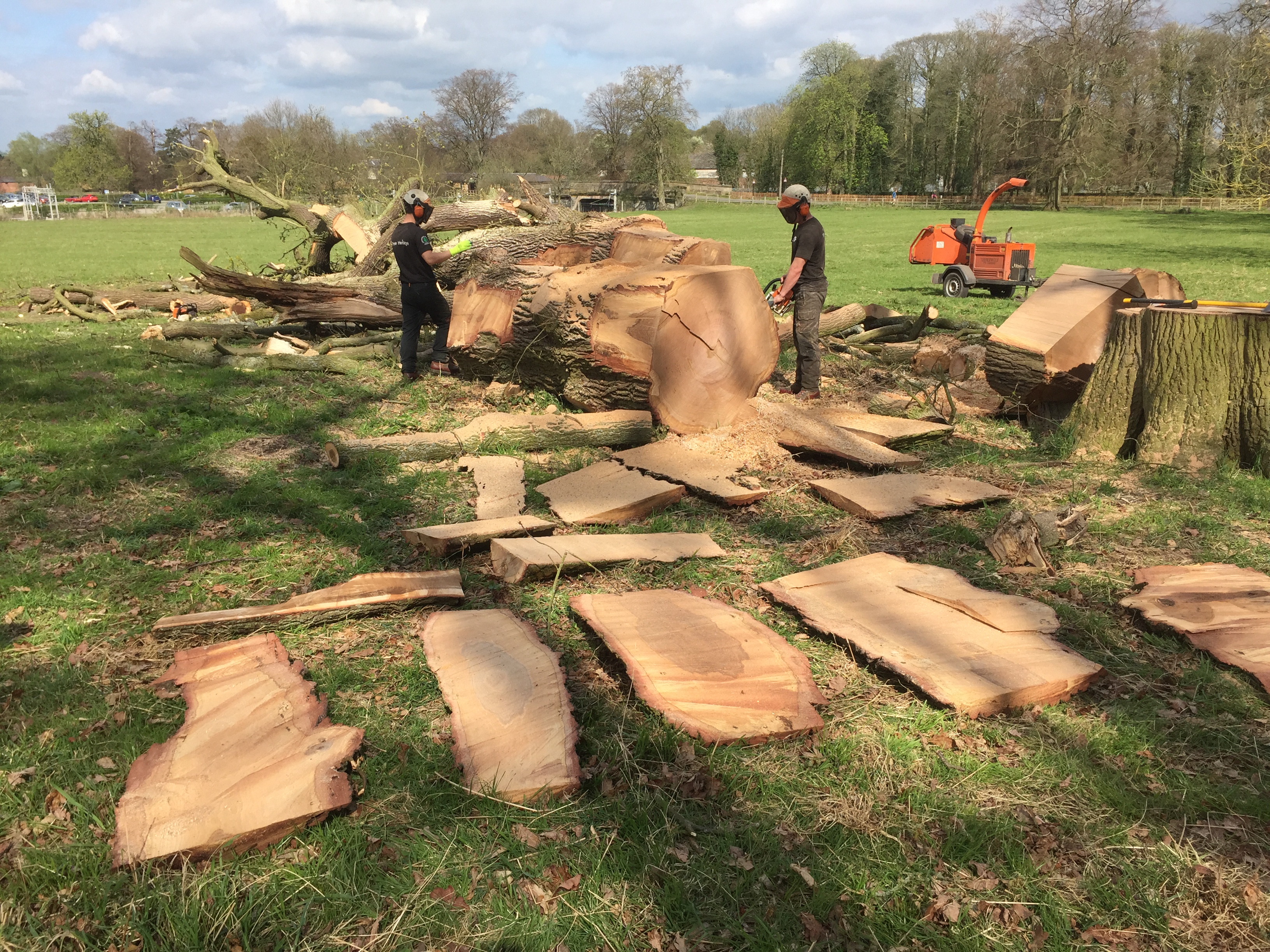 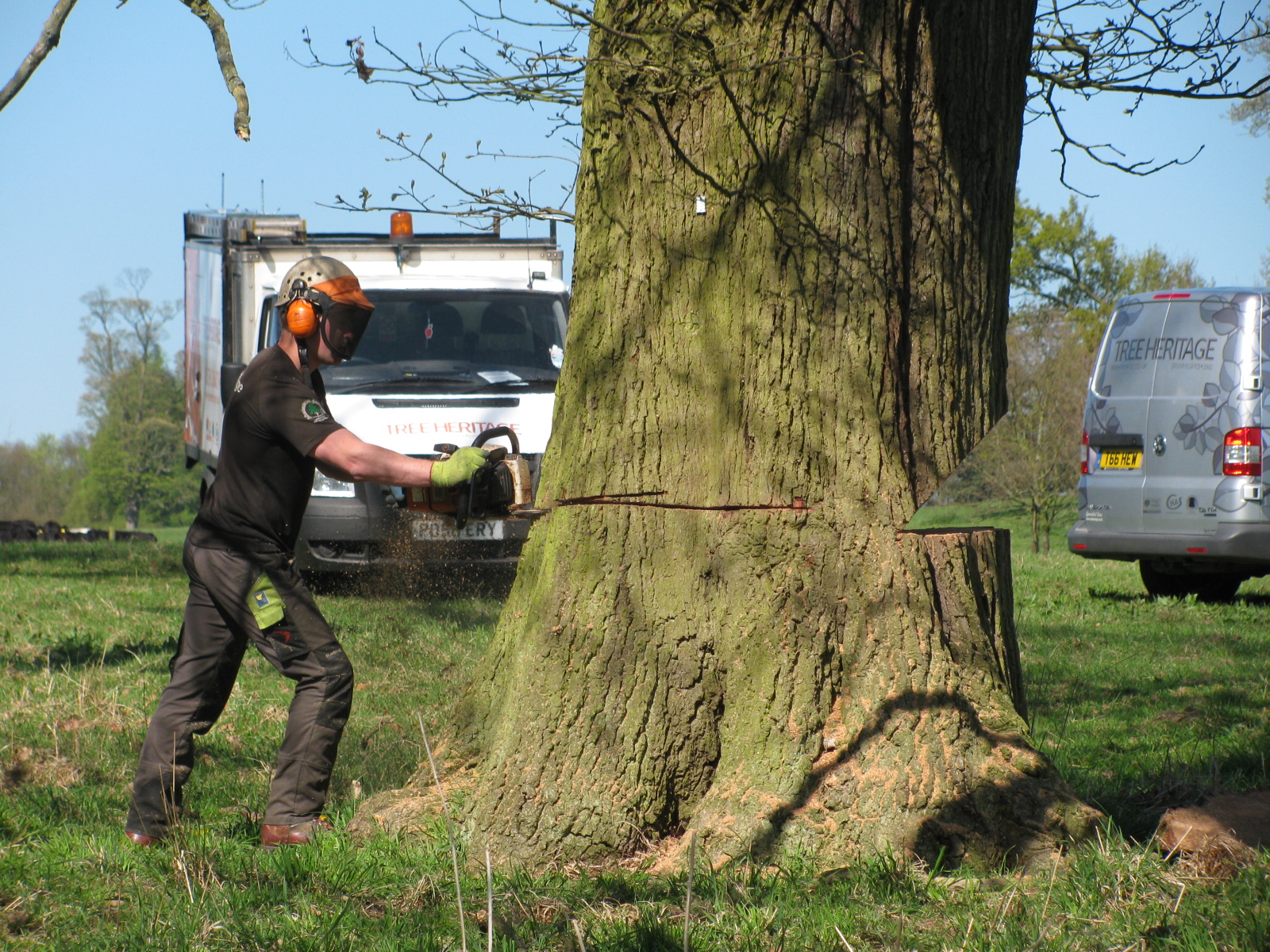 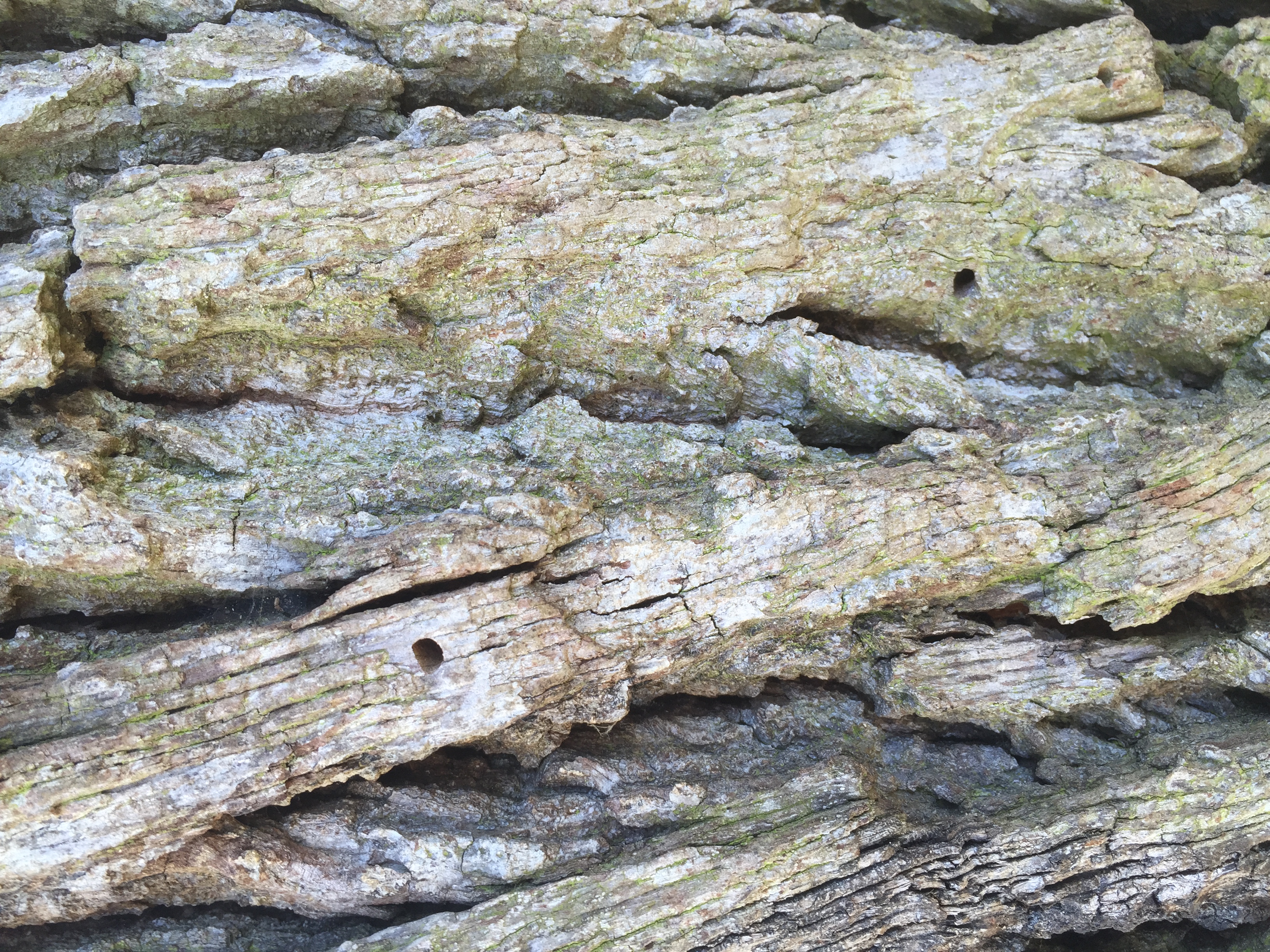 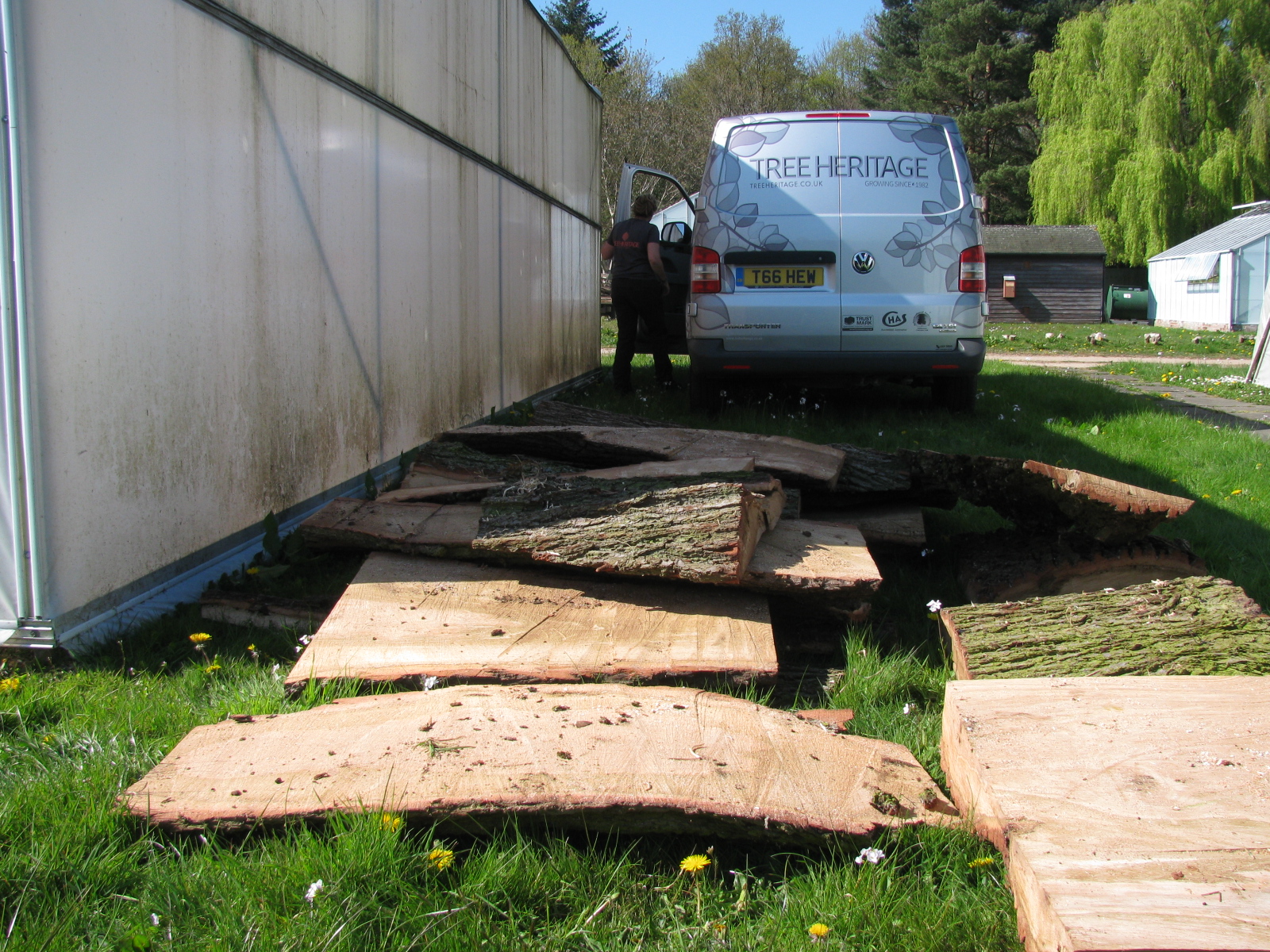 The tree is delivered to Alice Holt

The tree was felled, cut into manageable sections, brashed (had all it’s smaller branches removed and chipped), then large slab-like sections were cut out (hopefully containing the grub-like larvae) and these were loaded into a van to be driven to Alice Holt Forestry Research Station in Farnham, Surrey. Mary will get all the slabs of wood into a sealed environment so that when the larvae hatch out they can be collected and studied. Unfortunately, there wasn’t enough time to check out the forest with it’s trails, picnic areas and the Go Ape attraction but click here if you’re interested!: Alice Holt Forest
If you’d like more information about Agrilus biguttatus or Acute Oak Decline click here:
Forestry Research

As soon as we hear anything from Mary and her team about whether the samples successfully yielded some live beetles, we’ll let you know via Tree Heritage versus the Beetles, Part 2. However, in the meantime, if you’ve got any worries or concerns about your own tree or trees, give us a call or send us an e-mail via the link:

This was quite an unusual project to be involved with and we’re really hoping for everyone involved that there are some positive results. This is cutting edge science attempting to get ahead of what could possibly prove to be devastating to the English countryside…England without the Oak tree – unthinkable!!