Has your conifer tree or Yew hedge suddenly turned brown?! 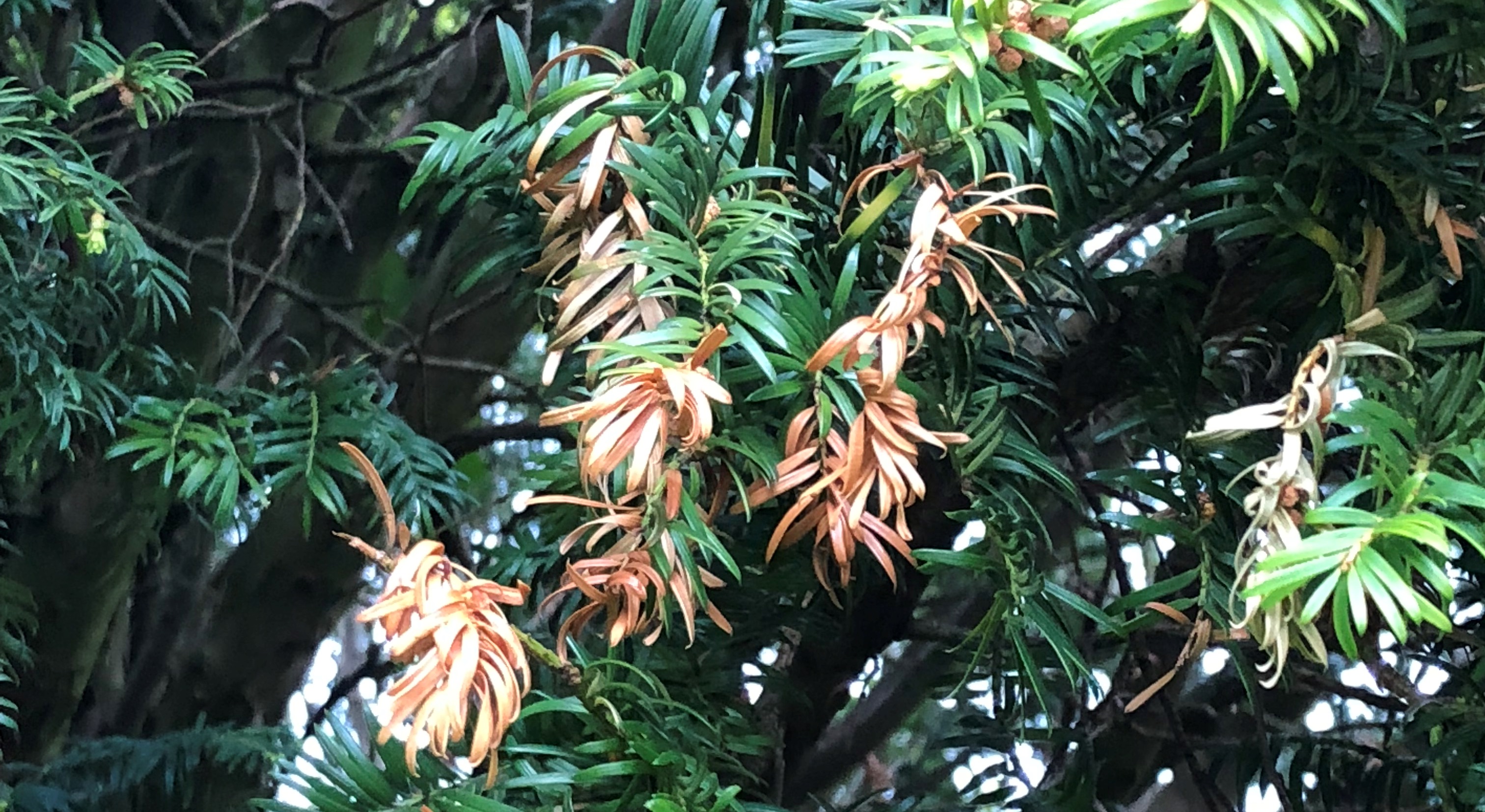 Have you recently noticed brown patches on your evergreen trees or hedges? We’ve seen a lot of this damage recently, especially in the Staffordshire and Cheshire area.

The reason for most of this damage can be seen best where you have a hedge which is exposed at the top and protected lower down. The brown areas of damage are concentrated at the top…this is where it’s been hit by intense fluctuations in both temperature and winds. 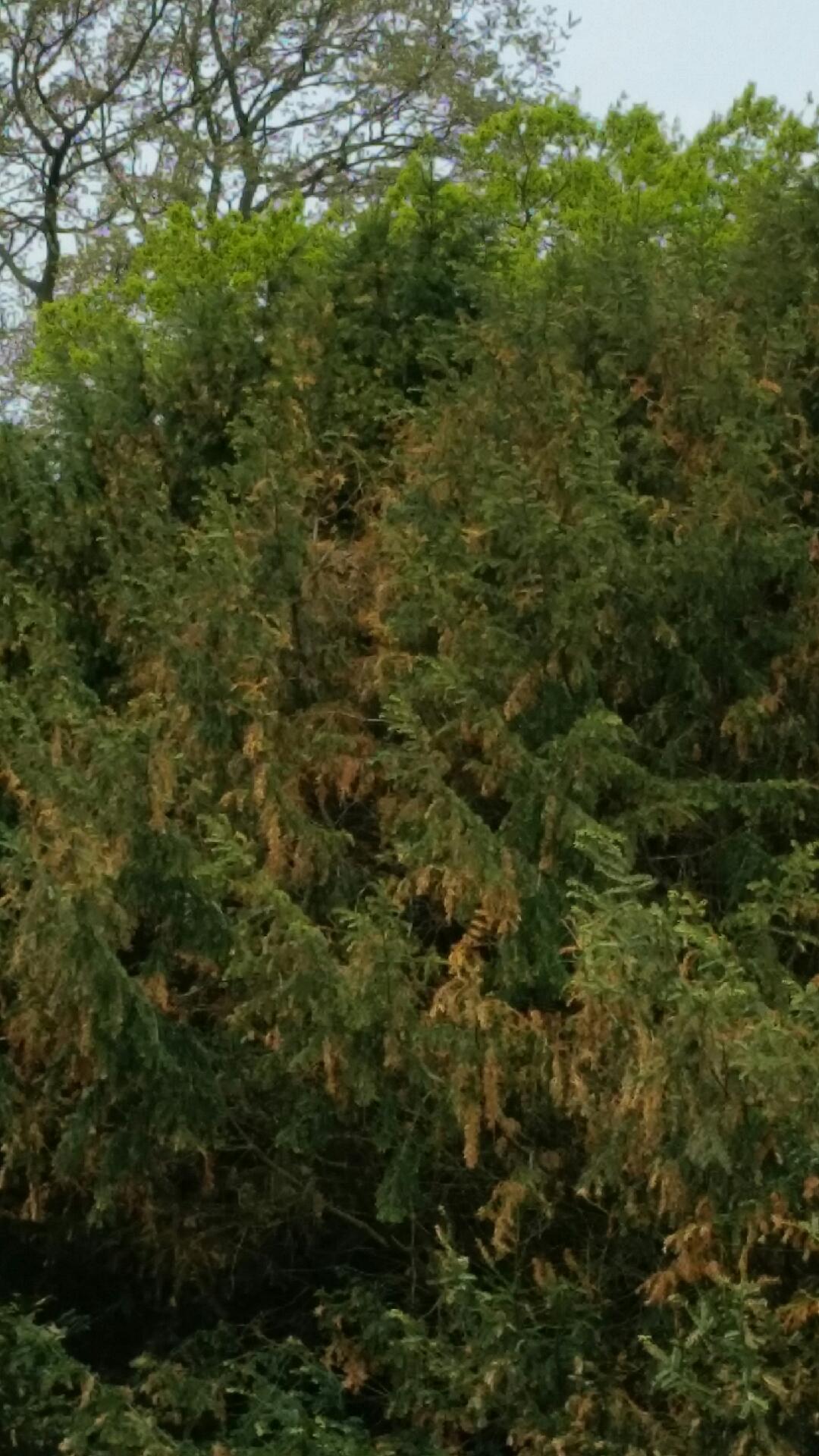 You may not remember much about the weather before ‘The Beast from the East’ arrived in March?

According to the Met Office’s Summaries, both January and February had some rather pleasant spells. This was good growing weather and evergreen trees and hedges responded with new shoots. On the 26th February, I was standing in a field in Devon, admiring some trees, whilst wearing a t-shirt and shorts. Two days later, there was a minimum temperature of -11.7 °C in nearby Hampshire, bitterly cold winds hitting us from north-west Russia and snow over much of the country!

All of those lovely new buds and shoots, plump with potential and ready to burst into growth, suddenly got hit with the worst possible conditions. Below zero temperatures during both day and night accompanied by freezing winds and frosts. All that young growth began to wilt and shrivel.

Add to this the recent spell of dry, very hot weather and you suddenly start to see the damage.

But don’t despair…have a little patience, and the evergreens will do what they’re best at – continuous growth and repair. The brown needles and shoots will be shed and behind them will come new growth. It may take a while, but your trees and hedges should be able to recover.

Don’t be tempted to prune it out or ask someone to do it for you. Those plants are under enough stress at the moment! The main thing to remember is that most conifers will not grow back from old wood. So if you prune them now, you could cut back too far and the plant will never recover. If you really want to give nature a helping hand, you could consider applying a general purpose fertiliser. If you’re not sure which one to get, look for one that specifically mentions conifers or evergreens on the packaging (and make sure you follow the instructions for applying it – too much can cause other problems!)

Just a note for anyone who has damage at the base of their hedges rather than at the top (especially alongside roads or footpaths):

Remember all of the roadsalt, grit and anti-freeze that was thrown around during March’s snowy conditions? It will have been shovelled and splashed by traffic onto the base of your hedge! Excess salt kills all plants – with the obvious exceptions of marine plants like seaweeds!

If the base of your hedge, whether it’s evergreen or not, is looking unhealthy or not coming into bud yet, it may have been damaged by salt and/or anti-freeze. The same goes for roadside trees, especially if they are young or recently planted. Salt damage on trees often shows up as leaves turning brown from the lowest branches working upwards. But if the tree hasn’t come into full leaf yet, this can be difficult to check?!

If you suspect that your hedge or tree has been damaged by salt, the only thing you can do is water it thoroughly, especially in periods of dry weather. This may help to wash the salt into the lower region of the soil where the trees roots won’t have access to it.

If you have any concerns regarding the health of any of your trees, give us a call and we’ll be happy to talk to you: Get in touch