Without wishing to alarm anyone – did you know that we are being invaded by an alien plant and that it could very well be in your garden?!

This is the perfect time of year to spot it and you need to be vigilant, this is one you can’t turn your back on and hope it will go away…it won’t. And the amateur gardeners methods of digging, strimming or simply ‘thrashing’ it could turn your horticultural problem into an ongoing nightmare!!

A guide to the identification of Japanese Knotweed and it’s yummy, non-invasive look-alike Rhubarb:

Stems of Japanese Knotweed look very similar to rhubarb, the leaves however are very different with many leaves along each stem as can be seen below. 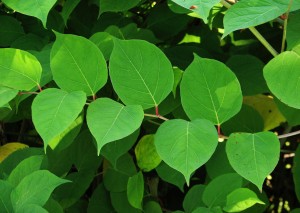 Stems of rhubarb showing the same pink speckles on a green background but the huge crinkly leaves appear as an individual leaf at the end of each stem. 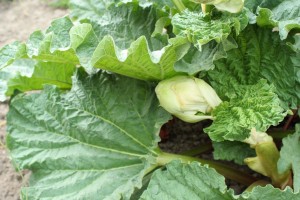 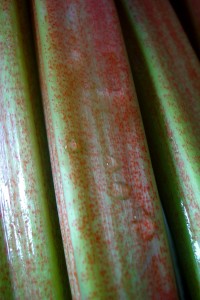 There’s a good reason why when you buy a rhubarb plant it’s called a ‘crown’ – this is exactly the shape it grows into: low, multiple stems, all of a similar height with a single, massive, crinkly leaf at the end.

Although the stem looks very similar in close-up, Japanese Knotweed has a very different form – individual stems can reach higher than 7 foot (2.1m), they develop a zig-zag shape as they grow taller and the spade-shaped, smooth leaves grow on both sides of the stem all the way to the end.

If you’re incredibly lucky, a rhubarb crown may consist of 20 or more stems (think of all the crumbles!) but if you’ve got Japanese Knotweed, you could be facing a thicket of 100’s or even 1000’s of stems! All of which are connected by a vast network of deep-rooted underground stems called rhizomes – and this is where the main problem lies. It’s classified as an ‘Invasive plant’ because that’s exactly what it does. A small clump one year will shade out everything around it and then it spreads by throwing up new shoots from the rhizomes, which then produce more shade and each year the patch grows bigger.

It’s very tempting to think that if you take a strimmer to it you can cut it back and get rid of it. If you’re a fan of Marvel comics and films, you’ll know the Hydra motto of “cut off a limb and two more shall take its place”. Japanese Knotweed is like Hydra on steroids – cut off one stem and many will take its place! It’s a similar story if you decide to dig it up…a small fingernail sized piece of the rhizome is capable of creating a whole new thicket.

If you have Japanese Knotweed on your land you are required by law to prevent it spreading into the wild or onto neighbouring properties – you could be prosecuted for causing a private nuisance. Its phenomenal ability to push its way through tarmac and concrete means that it is becoming an issue with mortgage lenders. If you do attempt to dig it up, you can’t throw it into the council tip – it’s classed as hazardous waste and needs to be dealt with by a specialist waste contractor!

But don’t panic! It can be treated and our method can guarantee that it doesn’t come back – in fact we’ll come back the following year and re-treat any stems that were missed. We have the training and technology to do this safely, without any damage to other plants or wildlife and regardless of weather conditions (unlike the relatively expensive and unpredictable method of spraying with chemicals which can take years of repeat application until the plant is eradicated).

Now you know what you’re looking for – go and have a look in your garden and don’t be afraid. If you think you’ve got Japanese Knotweed on your land but you’re not sure, send us a photo or we can come out to site and have a look for you.

If you want to get in touch with us, click on the following link:    Get in touch